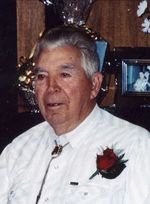 Joseph LaPorte Peacefully in the early morning hours of May 27, 2008, Mr. Joseph LaPorte, beloved husband of Doris LaPorte (Jackett) passed away at the age of 91. He leaves to mourn his passing, his wife of 68 years and his nine children: Joyce (John), Marlene (Wilfred), Olive (Fred), John (Shirley), Lloyd, Edward (Regina), Robert, Garry, Peggy (Jack). He also leaves behind over fifty grandchildren and numerous nieces and nephews. He was predeceased by his mother Mary and his father George, his sister Mary, and his three brothers; Wilfred, Clifford and Henry. Joe lived out 71 years of his life faithfully loving his wife Doris and providing a good life for her and their children. After retiring from a successful career in landscaping. He spent much of his time with his horses and participating in horse shows along with his children and grandchildren where he left many memories for all to cherish. A Memorial Service will be held at Cropo Funeral Chapel, 1442 Main Street, on Friday, May 30, at 11: 00 a.m. In lieu of flowers donations can be made to the Manitoba Cancer Society. Cropo Funeral Chapel 586-8044

Share Your Memory of
Joseph
Upload Your Memory View All Memories
Be the first to upload a memory!
Share A Memory
Send Flowers