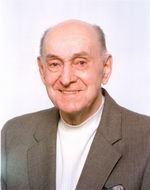 JOSEPH JOHN KOKRAN December 2, 1922 - May 15, 2008 In loving memory of Joseph Kokran who passed away at the Health Science Centre after a lengthy illness. Joseph was the youngest son of Joseph and Theresa Kokran. He was predeceased by his parents and brothers Martin (Kay) of Victoria and Nick (Sadie) of Winnipeg. Joe leaves to mourn his wife Nellie (Nell) of 58 years, three daughters Pat (Gord), Jonell (Wade), Rhonda (Andre), six grandchildren and ten great grandchildren, one sister-in-law Sadie Kokran, and relatives in Europe, BC, AB, SK, and MB. Joe was very fond of music and sports. He had been active in bowling at St. Joe's Bowling Club. He was retired from Labatts. He lived in the north end all his life. We wish to thank the staff at Seven Oaks and Health Science Hospitals, Misericordia Interim and Home Care workers. Cremation has taken place and a private family memorial will be held with interment of ashes to follow at St. Mary's Cemetery. An online book of condolences may be signed at www.cropo.com. Rest in Peace In lieu of flowers donations may be made to the Canadian Diabetes Association or a charity of your choice. Cropo Funeral Chapel 586-8044

Share Your Memory of
Joseph
Upload Your Memory View All Memories
Be the first to upload a memory!
Share A Memory
Send Flowers