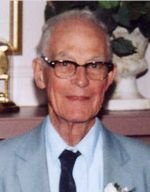 MARTIN SCOTT KARTZMARK February 11, 1918 - May 28, 2008 On May 28, 2008 Martin passed away peacefully after a brief illness at Seven Oaks Hospital at the age of 90. He was predeceased by his parents Martin and Mary Kartzmark, and brother Roy all of St Andrews Manitoba. Martin will be missed by his wife Germaine (Torcotte), eldest son Robert (Bob) and wife Sue, son Raymond, daughter Denise, husband Mike and granddaughter Angela Sawatzky, sister Elinor of St. Andrews and brother Robert and wife Betty of Sarnia Ontario, nieces, nephews and many friends. Martin grew up in St. Andrews helping his mother and father with the family market garden until his marriage to Germaine. They moved into Winnipeg built a house on Teakwood Avenue and lived there for 61 years. For the majority of his working life and until his retirement he worked at Versatile Manufacturing as a Supervisor in the paint and shipping department. He was known as hardworking, reliable, generous, and impeccably honest. Martin had a strong faith in his God Jehovah and looked forward to the time mentioned in the Bible at Revelation 21:1-4 where it says in part &quot;And I saw a new Heavens and a new Earth &Atilde;&cent;&Acirc;Â€&Acirc;&brvbar;.. and he will wipe out every tear from their eyes and death will be no more, neither will morning nor out cry nor pain be anymore the former things have passed away.&quot; A Memorial Service will be held on Wednesday, June 4 at 3:00 p.m. at Cropo Funeral Chapel, 1442 Main Street, Winnipeg. Cropo Funeral Chapel 586-8044

Share Your Memory of
Martin
Upload Your Memory View All Memories
Be the first to upload a memory!
Share A Memory
Send Flowers