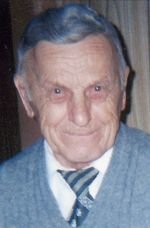 JOSEPH HENZEL It is with great sadness that we announce the passing of Joseph Henzel, March 21, 2008. Joe was predeceased by his first wife Margaret, mother Anna, father Stanley, sisters Mary Osadchuk and Frances Golowaychuk, brothers Steve and John Henzel, and son Peter in infancy. Left to mourn are his daughters, Sonya (Raymond) Block, Diana (Larry) Shuwera, and Nancy (Ed) Prociuk, grandchildren Gary (Rhonda), Sabrina (Trevor), Ryan (Chandra), Kyle, and Aaron, great- grandchildren Sara, Lauren, Caden and Fiona, sister Patricia Andriew, second wife Evelyn, and numerous nieces and nephews. Dad was born March 22, 1917 in the RM of Hanover. But we prefer to call it Pansy, Manitoba. He lived with his parents helping on the farm until he married Margaret Golowaychuk on September 22, 1943. They continued to farm in the area for the next 27 years. In 1970 they packed everything (and we mean everything) - they moved the house itself to Winnipeg, residing in sunny Transcona! Dad spent the remainder of his working years at Wilson Auto until his retirement in 1983. In his later years Dad enjoyed bingo, puzzles, bowling, swimming and golf. He also had a love of nature - often going to pick mushrooms and blueberries in the country, and tending to his garden and numerous indoor plants. His pride and joy included a wild Christmas cactus, covered in pink blooms each year and a high maintenance African violet. On holidays Dad was a different man - and he enjoyed his adventures immensely - be it a trip to the Black Hills, to British Columbia, or waiting nearly his whole life to set foot on a plane to visit Hamilton, Ontario! Dad should have been a race car driver - as getting behind the wheel was one of his favourite pastimes. His drives often ended at a familiar destination - Robin's Donuts on Regent Avenue where he made many friends (and enjoyed many a cruller). Always hospitable, at Joe's place you were guaranteed a stiff shot of Seagrams 83 and a friendly game of King Pedro or Hola. Though he was small in stature, Dad was not short on energy. He remained active well into his 80s with not a morning walk missed at Kildonan Place. Dad was a hard worker, a man of strong will yet quiet demeanour. Dad, we'll miss you. Special thanks to the Kildonan Personal Care Home and Parkview Place. A viewing will be held Tuesday, March 25, 2008, 7:00 p.m. at Cropo Funeral Chapel, 1442 Main Street, Winnipeg, Manitoba. Prayers to follow at 7:30 p.m.. The Funeral Services will be held Wednesday, March 26, 2008 at 10:30 a.m. at Sts. Peter and Paul Ukrainian Catholic Church in Pansy, Manitoba. In lieu of flowers donations may be made to the Heart and Stroke Foundation of Manitoba. VICHNAYA PAM'YAT CROPO FUNERAL CHAPEL 586-8044
Share Your Memory of
Joseph
Upload Your Memory View All Memories
Be the first to upload a memory!