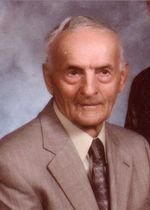 MICHAEL (MITCH) GUSTO 1916 - 2008 It is with great sadness we announce the passing of Michael Gusto on March 29, 2008 at Seven Oaks Hospital. Left to cherish his memory is his wife, Teena, of 65 years, his children Angela (Greg), Gloria (Denis), grandchildren Glenn, Mark, Sean, Michael and great grandson Donavin. He was predeceased by his parents Roman and Alexandria, his brothers Joseph, Paul, and Jan. Michael served in the Canadian Armed Forces and the Reserves. After the army he farmed in Rossdale till the late 90's. He continued his love of the land and the outdoors by planting a large vegetable garden every year. In the winter months he enjoyed baking bread and throughout the years he spent endless hours doing carpentry work for his family. Michael was a kind, caring, gentle man with a sense of humor and a heart of gold. People were automatically drawn to his easygoing generous personality. He had a very optimistic outlook on life. You would often hear him say &quot;That's neither here nor there&quot; and &quot;Things could always be worse&quot;. Michael was always there for those who needed him. He will be deeply missed and forever cherished. The family wishes to express their sincere thanks to the ER staff, the nurses and doctors on 4 and 5 and a special thanks to Dr. Jason. Divine Liturgy will be celebrated on Wednesday, April 2, 2008 at 10:00 a.m. at St. Nicholas Ukrainian Catholic Church, 737 Bannerman Avenue. Interment to follow at Holy Family Cemetery. In lieu of flowers donations may be made to the Kidney Foundation. VICHNAYA PAM'YAT CROPO FUNERAL CHAPEL 586-8044
Share Your Memory of
Michael
Upload Your Memory View All Memories
Be the first to upload a memory!