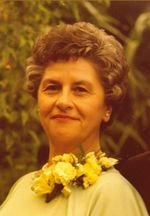 GRACEL, MARGARET (MARG) 1921- 2008 Margaret passed away on Monday, April 14, 2008 at the age of 86 years at the Seven Oaks Hospital. She was predeceased by her husband Robert (Bob) Gracel who passed away in March, 1999. Margaret was born in Winnipeg, August 28, 1921 where she lived most of her life. She married Bob Gracel in Winnipeg in 1943 where they lived and raised a family. For a brief time between 1944 and 1946 Margaret and Bob lived in Vancouver. After raising her three boys, Margaret began a 17 year career at the Health Sciences Center, Dept of Dietetics before retiring in 1984. Margaret was a loving wife, mother and grandmother. Margaret was a gifted singer who grew up singing in school and church choirs, the North End Sokol Hall and often performed as a soloist. Margaret had many interests including reading, gardening and listening to music especially classical and opera. She had many friends and always looked forward to getting together with lifelong friends at her monthly &quot;Ladies Club&quot;. Most of all, Margaret enjoyed her family and time spent with them. Margaret will be deeply missed and fondly remembered by her sons, Roderick, Tim and wife Christine, Perry and wife Linda; four grand children Sean, Jason, Branden and Michelle; sister Francis Langley; brother Ed Graboski, wife Sally, nephews David Graboski and wife Corrie, Peter Graboski and wife Keltie and their family; sister in law Agnes Manweiler; nephew Gerald Stanick and wife Mary, niece Lorraine Zuk and their families. Margaret touched many lives and will be sadly missed by all who knew her. A Memorial Service will be held at 2:00p.m. on Saturday April 19, 2008 at the Cropo Funeral Chapel, 1442 Main St. In lieu of flowers, donations in Margaret's memory may be made to the Manitoba Heart and Stroke Foundation or the Manitoba Cancer Foundation.

Share Your Memory of
Margaret
Upload Your Memory View All Memories
Be the first to upload a memory!
Share A Memory
Send Flowers