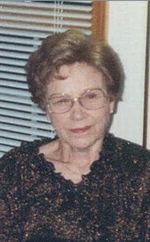 OLGA FENIUK Olga Feniuk departed on her celestial journey March 25, 2008 at a robust age of 91. Her husband Harry predeceased her in 1999 and her grandson Dean in 2002. Born in 1917 in Montana, Olga immigrated to Canada with her family in 1920 residing on a farm in Vita, Manitoba. She is survived by her wonderful daughter Alice, son-in-law Raye of Kelowna, BC and her only loving grandson Stephen of Vancouver. Olga was the last surviving member of the Prociuk family. Predeceasing her were, sisters Mary, Lena, Agnes, Stella, Anne, Margaret and brothers Walter and John. Olga meticulously tended her garden, flowers, and home and enjoyed her family and friends. Later in life, politics (both family and government) became her favorite interest. The family regrets the delay of notification and procedure which are a consequence of family health issues and distance. Funeral Service will be held on Thursday, April 10 at 2:00 p.m. at Cropo Funeral Chapel, 1442 Main St. Interment will follow in Glen Eden Memorial Gardens. Flowers gratefully declined, however, donations in Olga's memory may be submitted to the CancerCare Manitoba or the Heart and Stroke Foundation.

Share Your Memory of
Olga
Upload Your Memory View All Memories
Be the first to upload a memory!
Share A Memory
Send Flowers