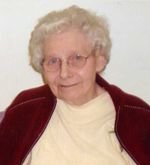 ANNIE MARGARET ELVISS Peacefully slipped away on May 4, 2008 surrounded by her much loved niece Barbara and her family, Dave, Caitlin and Josh and friends Cheryl &amp; Jon Derry at her bedside at Vista Park Lodge. She leaves to cherish her memory her dear sister, May Madill of Swan River; nieces, Marilyn (Dave Kasper) of Calgary, Barbara (David Morrison) of Winnipeg, Heather (Wesley Hofford) and nephews Jim Madill (Sharon) of Bowsman, David Elviss (Brenda) of Niagara on The Lake, Ty Elviss of St. Catherines, and Shawn Elviss (Rose) of Fergus and her great nieces and nephews Tom, Lauren Ann, Kristopher, Kurt, April (Joseph Orona), Jeremy, Justin, Jeremy H, Caitlin, Jaimi, Josh, Ryan and Scott. Anne was pre-deceased by her parents George and Margaret; her brother Tom; brother-in-law Keith Madill; sister-in-law Theresa; sisters Eleanor and Marjorie and brother in law Jock. Anne was born at home in Swan River, MB, on February 29, 1920, the middle child to George and Margaret Elviss. Anne started her working career in Swan River working for Eli Cox and Son in the dry goods. She left Swan River and headed east to Toronto where she began her career with T.E. Eaton. She worked in Toronto for a few years and then headed back to Winnipeg where she remained. Anne worked for over 40 years with the T.E. Eaton Company in the Fashion Fabrics Department. She was a true Etonian. After her retirement she was very active with the Eaton Retiree Group for many years. Anne remained in her own home until December 2007 but because of declining health it was decided it was time to move and she moved into Vista Park Lodge. The family would like to thank the staff at Vista Park Lodge for all your care and genuine compassion while looking after Auntie Anne. A special thank you to Shirley Hudson &amp; Brian Fedak for all your help when she was still at home. All of you are true angels. Thank you to special family and friends who came to help us celebrate Auntie Anne's 88th birthday in February. She loved seeing all of you. Funeral Service was held on Thursday, May 8 at Cropo Funeral Chapel, 1442 Main St. Interment was at Birchwood Cemetery in Swan River on Saturday, May 10. In lieu of flowers, donations may be sent to Alzheimer's Society of Manitoba, 120 Donald, Winnipeg, MB R3C 4G2 cropo Funeral Chapel 586-8044

Share Your Memory of
Annie
Upload Your Memory View All Memories
Be the first to upload a memory!
Share A Memory
Send Flowers