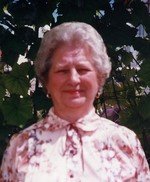 ANNA DOVIDIJA It is with great sadness that we announce the peaceful passing of Anna Dovidija on August 13, 2008 at Seven Oaks Hospital at the age of 78. Remaining to cherish her memory is her only daughter Elizabeth Dovidija-Budney; grandsons Michael Dovidija, Devin and Eric Budney. Devin and Eric could always bring a smile to Maca's face, as they called her. She will be missed by other family members and friends. Anna was born in Smuka, Yugoslavia on October 14, 1929, she was the second child of nine siblings. She moved to Canada in 1958 and there met her husband to be, Viljem, who predeceased her in 2005. Anna had many jobs, then worked at Ready Foods for a number of years. After 46 years of marriage, Anna will join her husband at their resting place.. A Funeral Service will be held on Wednesday, August 27 at 2:00 p.m. at Cropo Funeral Chapel, 1442 Main Street at Inkster. Interment to follow in Glen Eden Memorial Gardens. Cropo Funeral Chapel 586-8044
Share Your Memory of
Anna
Upload Your Memory View All Memories
Be the first to upload a memory!