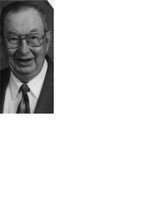 Theodore (Ted) Creran January 1, 1929 - July 8, 2008 It is with heavy hearts, yet undying love that the family of Theodore (Ted) Creran aged 79 announce his peaceful passing on Tuesday July 8, 2008 at Seven Oaks General Hospital. He will be lovingly remembered by his wife of 57 years, Mable, his daughter and son-in-law Diane and Ken Jarmuske, his daughter and son-in-law Lynn and Gerry Goodrich, and his grandchildren whom he adored and loved, Corey Jarmuske, Christine (Josh) Bashow, Carly Goodrich, and Kurt Goodrich. He is also survived by his two brothers, Allan and Bernie Creran. Ted's greatest loves in life were his family, his faith, and his love of flowers. Ted was born on January 1, 1929. He married Mable on May 19, 1951. He spent many happy times with his children and grandchildren at Laclu, Betula Lake, and Idle Wheels. He traveled to his beloved Hawaii on numerous occasions with good friends and family. Ted worked at the T. Eaton Co. for 30 years. He then found his dream job at the Assiniboine Park Conservatory as a Gardener II. His love of flowers flourished, as did he. Ted worked tirelessly for the Knights of Columbus. He was Charter Grand Knight for St. Theresa's council and Grand Knight at St. John's council. His involvement in the church was done with great passion. He sang in the choir, arranged the parish's &quot;Hawaiian dances&quot; for 17 years, and did what needed to be done without question. The family would like to thank the following people for the compassionate care Ted received during his illness. Dr. Ross, Dr. Fatoya, Ruth, nursing and support staff of Seven Oaks General Hospital, Louise, Susan, Kim, &amp; Janice of Home Care. From Mum and Dad to Lynn: Thank you for your caring, your support, and your loving sacrifices for us. To Diane: Thank you for being there when we needed you the most and for your love always. Prayers will be held on Monday, July 14 at 7:00 p.m. at Cropo Funeral Chapel, 1442 Main St. Memorial Mass will be celebrated on Tuesday, July 15 at 11:00 a.m. at St. Theresa's Roman Catholic Church, 3596 Main St. Interment to follow in Assumption Cemetery. If friends so desire, donations may be made in Ted's memory to CancerCare Manitoba or the Heart and Stroke Foundation. An online book of condolences may be signed at www.cropo.com
Share Your Memory of
Theodore
Upload Your Memory View All Memories
Be the first to upload a memory!