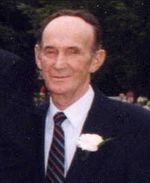 NIKOLA CACIC It is with deep sadness that we announce the passing of our dear brother, uncle, godfather, dido Niki and friend, Nikola (Nick) Cacic, on March 22, 2008 at the age of 74 years. Nick, as everyone knew him, was born November 15, 1934 in Kalinovaca Lika, Croatia. He came to Canada in 1958 where he worked at CP Rail and also throughout Northern Manitoba, Saskatchewan and B.C. as a heavy duty diesel mechanic. Left to cherish his memory are brothers Ivan (Tina), Joso (Ana) of Croatia, nieces Maria (Ken) and family, Ana (Jack) and family, Nephew Tomislav Cacic and family of Switzerland, nieces Mira Cacic, Anka Stilinavic and families of Croatia, cousins Nick Cacic (Nada) of Strathroy, Ontario, Nick Pavletich (Zorka) of Raton, New Mexico, special godson Joey Brnjas, longtime friend Milka Kovac, and numerous relatives and friends, too many to mention. We are very grateful to have had you in our lives. You were a special man who had love for your family and friends. We all loved you very much and we will miss you so much. Special thanks to the nursing staff and doctors on the 5th floor at Seven Oaks Hospital for all your care and compassion. Prayers will be said on Thursday, March 27, 2008 at 8:00 p.m. at Cropo Funeral Chapel, 1442 Main Street. Mass of Christian Burial will be held on Friday, March 28 at 10:00 a.m. at St. Nikola Tavelic Croatian Roman Catholic Church, 2688 Main Street. Interment at Glen Eden Memorial Gardens. Zbogom brate, pocivaj u miru bozjem. Nikad te necemo zaboravti. CROPO FUNERAL CHAPEL 586-8044
Share Your Memory of
Nikola
Upload Your Memory View All Memories
Be the first to upload a memory!