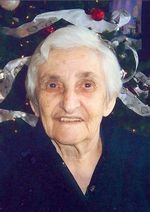 Ekaterini Bountrouca (nee Andrianopoulos) It is with sadness that we announce the peaceful passing of our mother, grandmother and great-grandmother on March 21, 2008, with her family by her side. Our mother was born in Pikerni, Arkadias Greece where she married Panagioti and together had three children. Unfortunately her years with her husband were shortened, which left her a widow at a young age. She leaves to mourn her son Nick (Helen), daughter Manto (Steve), 9 grandchildren, 8 great-grandchildren and numerous nieces and nephews. She was predeceased by her husband Panagioti, her parents (Ioannis and Demetra), her brothers (Elia and Panai), her son-in-law Peter and her daughter Georgia. She immigrated to Canada in 1962 and established a life in Winnipeg with her children. She enjoyed family gatherings and sharing stories with her grandchildren about her life in Greece. Grandma was eternally grateful for the life she had without illness and suffering. The family would like to acknowledge the loving care she received at West Park Manor, with a special thank you to Soula and Maria for their extra efforts. A prayer service will be held at St. Demetrios Greek Orthodox Church, 2255 Grant Ave. on Wednesday, March 26, 2008, at 7:00 pm with Fr. Gianniou officiating. Funeral service will be held on Thursday, March 27, 2008, at 1:00 pm also at the same location. Interment will follow at Brookside Cemetery. Pallbearers: George Aggelopoulos, Gus Aggelopoulos, John Manousos, Petros Manousos, Lance Wyatt and Jason Zarrillo. In lieu of flowers, donations may be made to the Manitoba Hellenic Cultural Centre. ????as?? ? ???&Atilde;Â‚&Acirc;&micro;? ?a?a ?a? G?a??a We Will Miss You CROPO FUNERAL CHAPEL 586-8044
Share Your Memory of
Ekaterini
Upload Your Memory View All Memories
Be the first to upload a memory!