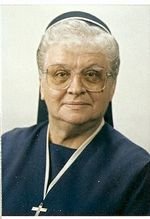 SISTER GERMAINE OLGA BOHDAN, SSMI 1925 - 2008 Sister Germaine died peacefully on March 31, at the Humber Finch Hospital in Toronto in her 83rd year and 65th year of religious life. She was born John and Mary (nee Stelmach) Bohdan on August 15, 1925, in Komarowa, Ukraine. Her parents immigrated to Canada in 1927, and farmed near Arran, Saskatchewan, Olga's mother died when she was 5; thus her father entrusted Olga and her sister Anne to the care of the SSMI in Yorkton, SK. Her two brothers remained with their father. Olga decided to become a Sister Servant during her high school years. She entered the Congregation on March 01, 1943. Sister Germaine discovered that her joy was in teaching. She taught 1947 - 1990 in Winnipeg, Montreal, Prince Albert, Yorkton, Vegreville, Calgary, Toronto, and in Detroit and Youngstown, USA. After Sister Germaine superannuated in 1990, she took Pastoral Care Courses. She suffered a stroke in 1995 and became a pioneer resident at the Ukrainian Canadian Care Center where she continued her Pastoral mission. Funeral Services for Sisters Germaine and Polycarp SSMI will be at St. Nicholas Church, 737 Bannerman Avenue, Winnipeg. Panakhyda on Sunday, April 6 at 7:00 p.m., Funeral Liturgy on Monday, April 7 at 10:00 a.m.
Share Your Memory of
Sister
Upload Your Memory View All Memories
Be the first to upload a memory!