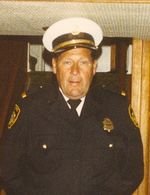 KENNETH JOHN ALLAN The family of Kenneth John Allan sadly announce his passing on April 17, 2008 at the Deer Lodge Centre. Dad was born May 9, 1927 in Winnipeg, and was just shy of his 81st birthday. Survived by son Glenn (Pam), grandson Cory, son Jeff, grandson Jordy, his special friend Ethel Grant, his sister Eleanor, brother Bruce, many nieces and nephews. He will be sadly missed by his lifetime friend Hugh Crossan and wife Lorraine. John was predeceased by his first wife, Anne (Doroz), second wife, Doris (Kot), his parents Thomas and Doris Allan, brothers Lorne and Clarke, and sister Doris. John spent the early part of his life on the Allan family homestead in Cordova, Manitoba. The family moved to the North End where he attended Isaac Newton School and excelled in sports, rugby, track and field and became a Bolo champion. Dad joined the Winnipeg Fire Department in July 1,1950. He was promoted to Lieutenant 1974, Captain 1980, and retired as District Chief, Regiment # 224 in 1986. Dad was inducted as a proud Life Member of the Canadian Firefighter Curling Association in 1995. He competed and won several Provincial Curling championships however the Canadian Championship eluded him. He was Director for the Fire Fighter Curling Association for ten years (1969-1979). John was also an avid golfer, curler and bowler, winning many trophies and bragging rights. He was a member of the Bell Acres Golf and Country Club for 25 years until his health no longer allowed him to play the game that he loved. Dad enjoyed playing golf with his many friends and his two sons. He also liked to shoot pool and enjoyed passing on a few tips to the boys. He had many fond memories of the summers that he spent at Spruce Sands Trailer Resort, with his family, brother Lorne (Phyllis), Tom, Phil, Muriel as well as his 'fire fighter family'. The family would like to thank the staff at the Deer Lodge Centre for the care and dignity that they provided for our father John. Also thanks to George Smith, Chaplain Mark Young and the Winnipeg Fire Dept. for their support during this difficult time. Special thanks to Jim Palmer for his visits, support and transportation. A Memorial Service will be held on Wednesday, April 23 at 11:00 a.m. at Cropo Funeral Chapel, 1442 Main Street. In lieu of flowers, donations may be made in John's memory to The Fire Fighter's Burn Fund.

Share Your Memory of
Kenneth
Upload Your Memory View All Memories
Be the first to upload a memory!
Share A Memory
Send Flowers