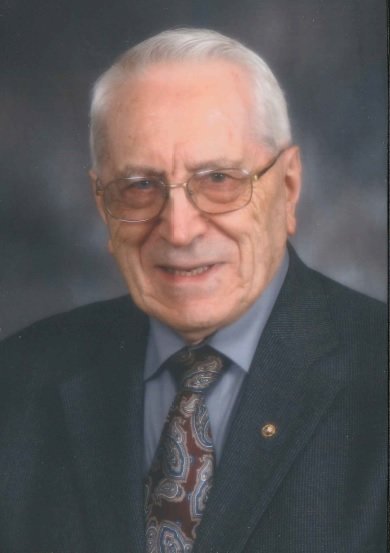 Surrounded by members of his family, early Saturday morning, February 16, 2019, Albin Joseph Polz at the age of 95 passed peacefully from this world into the loving arms of God during a brief stay at the Transitional Care Unit, Misericordia Health Centre, Winnipeg.

Left to cherish his memory are his children Rev. Fr. Robert Polz, James Polz, Diana Morgan, Edward Polz, Susan Polz and son-in-law Kristofer Hiebert, his grandsons Jordan Fulawka, Matthew Polz (and mother Sonja), his granddaughters Anika Hiebert and Holly Hiebert, his sister Bernadette Smith-Gander, his brother Martin Polz, and several nieces and nephews.  He was predeceased by his wife Elizabeth, his parents Stephen and Susanna, his siblings Sr. Albina (Hyacinth) and brother Frank, and infant sister Annie Mary.  He also grieved the loss of his grandson Kent Fulawka who disappeared in the fall of 2001.

Albin Joseph was born on September 21, 1923 in a little town called Hochwies (Velke Pole) in what is now Slovakia, in Central Europe.  He emigrated to Canada with his parents and sister, Hyacinth, when he was five.  Albin and Hyacinth grew up in Denzil, Saskatchewan together with three other siblings born there.  At the age of 17, Albin joined the Society of Jesus (Jesuits) to discern a possible vocation to the priesthood.  Shortly thereafter, his sister Hyacinth joined the Ursulines of Prelate where she became known as Sr. Albina highlighting the very close relationship she had with her beloved elder brother Albin.  The rest of the family eventually migrated to British Columbia.

Albin’s university education included degrees in Arts, Education, and Philosophy.  Although Albin left the Society of Jesus after several years, he always remained deeply grateful to the Jesuits for the spiritual formation they gave him and his training in Arts and Philosophy.  A well-respected teacher for several decades, most of Albin’s efforts in the field of Education were devoted to languages, linguistics, and curriculum work.  He taught students at Junior High and Senior High school levels, as well as University and Adult Education.

Albin married Elizabeth (Betty) Margaret Stefaniuk on September 24, 1960 in St. Mary’s Cathedral, Winnipeg.  Al and Betty were active members of St. Mary’s Cathedral Parish for many years since their younger days of involvement with the Catholic Youth Organization.  Service to God and Church always played a significant role in their family’s life.  Over the years, Al served in such ministries as Lector, Extraordinary Minister of Holy Communion, Parish Finance Trustee, etc.

When their son Fr. Robert became pastor of the neighbouring parish of St. Edward the Confessor in 1999, Al and Betty decided it was time to follow him and become parishioners there.  They made many new friends at St. Edward’s and became involved in the R.C.I.A. process helping to evangelize and welcome new members into the full communion of the Catholic Church.  The untimely death of Albin’s beloved wife Betty on May 7, 2002 was a terrible shock which he bore with great calmness and trust in God.  Indeed, the very day after Betty died, Al still went to church as originally planned to lead an R.C.I.A. session, a lesson on prayer which he had prepared together with his wife.

Membership in the Knights of Columbus was an important part of Albin’s commitment to Christian service.  The Order’s principles of charity, unity, fraternity and patriotism inspired his participation in a variety of activities over the years that made him a true witness to the faith working for the betterment of others in both the parish and community at large.  He first was a member of Winnipeg Council #1107, then a charter member of Archbishop Alfred A. Sinnott Council #9036, a member of St. Edward’s Council #11005, and at the time of his passing was a member of St. James Council #4557.  As a 4th Degree Knight, Sir Knight Albin J. Polz had served as a Past Faithful Navigator and was an Honorary Life Member in the Captain Miles MacDonell Assembly #0370.

Following his retirement from teaching, Albin maintained his interest in language and linguistics by beginning Aramis Translation Service.  His other special post-retirement interest was the field of holistic health and complementary medicine.  He continued an abiding interest in religion, literature, music, government and politics.  A list of recreational activities, pursued at one time or another, would include chess, bridge, photography and sports, both as participant and/or spectator – favourites were golf, curling, baseball and football.

Upon invitation of his daughter Susan and husband Kris, Albin eventually left St. Edward’s Parish to join Blessed (now Saint) John XXIII Parish.  In the summer of 2015, Albin and his daughter’s family were especially grateful to find out that Archbishop Gagnon had appointed Fr. Robert as pastor of Saint John XXIII Parish.  Almost every Sunday, even when his health was failing greatly, Grandpa Al would accompany his beloved granddaughters Anika and Holly to join them and their parents with the community of Saint John XXIII as his son Fr. Robert presided over the celebration of the Eucharist.  The weekly trek to church usually also included going out together for an enjoyable Sunday brunch following Mass.  The family is greatly indebted to many parishioners and dear friends who supported Grandpa Al especially in his last months and weeks among us.  We are most grateful to those whom he called his “Angels”, those who visited him and cared for him so lovingly and brought him Holy Communion as “Viaticum”, that is as food for his final journey to the home of our Heavenly Father.

Prayer Vigil for the Deceased will be held at 7:00 p.m. on Friday, February 22 at Cropo Funeral Chapel, 1442 Main Street.  (Recitation of the Rosary and Tribute by the Knights of Columbus at 6:30 p.m. immediately before the Vigil.)  Funeral Mass will be celebrated at 10:00 a.m. on Saturday, February 23, 2019 at Saint John XXIII Roman Catholic Church, 3390 Portage Avenue (at Rouge Road) with Albin’s son Reverend Fr. Robert Polz as presiding priest and brother priests and friends concelebrating.  Rite of Committal to follow in the Garden of Nativity, Assumption Cemetery.

In Christ the hope of blessed resurrection has dawned,

that those saddened by the certainty of dying

might be consoled by the promise of immortality to come.

Indeed for your faithful, Lord, life is changed not ended,

and, when this earthly dwelling turns to dust,

an eternal dwelling is made ready for them in heaven.

Roman Missal – Preface I for the Dead