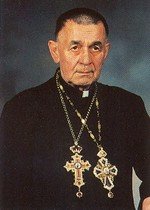 RT. REV. FR. PROTOPRESBYTER MICHAEL M. PAWLYSHYN Peacefully on January 16, 2009, at Seven Oaks Hospital, the Rt. Rev. Fr. Protopresbyter Michael M. Pawlyshyn passed at the age of 88. Remaining to cherish his memory are his wife of 66 years, Dobrodiyka Olha, and his children Ihor Pawlyshyn (Marianne), Julia Kowalchuk (Gary), Nicholas Pawlyshyn (Yolanda), and his grandchildren Michael and Maria, Adrian, Christopher, and Anastasia, Brian and Melanie, his brother Bohdan, numerous relatives in Ukraine, and across North and South America, as well as his many godchildren, and his parish family. He is predeceased by his parents Julia and Nicholas, brothers Stepan, Ivan, and Fedir, and sisters, Stefania, Maria, and Pelahia, and son Alexander. He was born in Bethlehem, Pennsylvania, on September 23rd, 1920; the family returned to Ukraine in 1923. There he attended Public School in Khyshevytchi, county of Rudky, Wojewudstvo, Lviv. In 1933 he entered &quot;Gymnasia&quot; at Redemptorist Fathers Monastery for High School and Theology. In 1937 he joined the Air Force School at Bydgoszcz, Poland, and upon completion was sent to Yagelonske, University of Krakow for a semester of Geography. In 1939 he earned the rank of Lieutenant-Pilot, and was subsequently assigned to squadron #92 in Western Ukraine. While serving in Ukraine, he met and later married Olha Tychonky in Mostyska, Western Ukraine, on July 14, 1941. He sent his new wife back to Canada, while he continued his WWII service in Europe. Postwar, 1945, while still on active duty, he studied by correspondence at the University of Munich, and Theological Academy of the Ukrainian Orthodox Church in Munich, and the Theological Seminary of the Ukrainian Catholic Church in Hirshberg, Bavaria. He returned to Canada, and moved his wife Olha, and son Alexander to Hamilton, before returning to Winnipeg in 1948 where he attended St. Andrews College. In 1951, they returned to Hamilton where he took courses in Metallurgy and Physics at McMasters University, while working at Stelco. His family joined St. Volodymyr's Ukrainian Orthodox Church, where he was a member of the church executive, and served as a Cantor for then Very Rev. Father Vasyl Fedak. He was also instrumental in starting a church printing shop where he acted as printer and publisher of the church newspaper. Later that year, he was ordained a Subdeacon by Bishop Platon. From 1958 to 1966, he continued his Theological studies by a special correspondence program prepared by His Beatitude Metropolitan Ivan Theodorovich. In 1966, he left Stelco, and was ordained to the Deaconate on September 21st by His Eminence Archbishop Mystyslav, and to the Priesthood by His Eminence on November 26th, at St. Volodymyr Cathedral in NYC. He would serve 7 different parishes in the Eastern United States over the next six years, and served as a missionary priest, from 1972 until 1975 in the Western New York area. In 1975, he joined the Ukrainian Orthodox Church of America under His Excellency Metropolitan Andrei Kuschak, and served as a missionary priest until February of 1977, when he was assigned to St. Ivan Suchavsky Cathedral in Winnipeg, and has remained for the last 31 years. In 1980, his family joined him in Winnipeg, and has called it home ever since. During his time in Winnipeg, Fr. Michael was elevated to Very Reverend, and then Rt. Reverend Protopresbyter by His Excellency Metropolitan Andrei Kuschak. He acted as Administrator for Canada for the Ukrainian Orthodox Church of America from 1985-1988, and was instrumental in bringing about St. Ivan's affiliation under the Ukrainian Orthodox Church of Canada. He served as parish priest at St. Ivan Suchavsky Cathedral until his retirement in 2000, remaining attached as priest emeritus. He continued to serve the church in this capacity, and was one of the driving forces of the church Pyrohy Club. Family was very important to our father and he cherished every moment spent with his loving wife, children and grandchildren. He enjoyed discussing his grandchildren's activities and accomplishments and offering his loving guidance. He will be missed as a Spiritual Father, Husband, Tato, and Dido, and especially for his love, faith, humour, and wisdom. The family would like to express our heartfelt thanks to Dr. Patel, the Paramedics, and the Seven Oaks Hospital Emergency and Unit 5 staff for their special care during this difficult time. Prayers will be held on Thursday, January 22, at 7:00p.m. at St. Ivan Suchavsky Cathedral, 939 Main Street. Funeral Rite for Clergy will be celebrated on Friday, January 23 at 9:30 a.m. also at the Cathedral officiated by His Eminence Metropolitan John. Interment will follow at Glen Eden Cemetery. In lieu of flowers, memorial donations can be made to St. Ivan Suchavsky Cathedral. Vichnaya Pam'yat - Memory Eternal
Share Your Memory of
Rt.
Upload Your Memory View All Memories
Be the first to upload a memory!