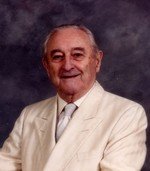 JAMES ARTHUR CHAGNON May 4, 1917 - November 27, 2008 On Thursday, November 27, 2008 at the Middlechurch Home of Winnipeg, after a battle with mantle cell lymphoma and Alzheimer's, James Arthur Chagnon, age 91, passed away with his son and daughter-in-law at his side. God called Dad home for Christmas. James was born May 4, 1917 in Winnipeg, to Alfred Chagnon and Eva McCarthy He was the fourth child in a family eight, with seven living to adulthood. He married Anne Dowhopoluk on July 14, 1940 and they had almost 57 years of marriage, when she passed on in April 1997. He was predeceased by his parents, and by an elder brother George Alfred, in infancy. Dad was the last of the siblings, and was predeceased by his brothers and sisters, Pearl Lennon, George William Chagnon, Helen Wall, Robert Chagnon, Dorothy Markus, and Alberta McQuade and by a grandson-in-law Spencer Stratford. Left to cherish his memory are his only son James Kenneth (Jean), his grandchildren. James Leslie (Michelle), Kelly Cotie (Jesse), and Jana Stratford and his great-grandchildren Stephen Duncan, Kaylee and Malcolm Cotie, Brenna and Shayla Stratford. James worked for Canadian Pacific Railway He had a long career with the railway, starting as a call boy and retiring as a retarder operator with the majority of his career spent as a switch foreman. After retiring he kept busy for many years, bowling at the Rossmere Lanes a couple of days a week, and as a long time parishioner of St. Anne's Ukrainian Catholic Church he enjoyed making perogies and playing bingo at the Church. Dad was known for his humor and loved to tell jokes. He was a people person and was happiest surrounded by his friends and relatives. Family was most important to him and he loved any occasion when everyone could get together. The family wishes to thank Dr. Harvey B Lee, his personal physician, the many Doctors, medical staff, and caregivers at CancerCare Manitoba, Riverview Health Centre, and Middlechurch Home. Also Homecare worker Oliver, and Maureen Cognali and staff of Access River East, who enabled him to stay in his apartment. Prayers will be said on Tuesday, December 2 at 7:00 p.m. at St. Anne Ukrainian Catholic Church, 455 Douglas Avenue. Divine Liturgy will be celebrated on Wednesday, December 3 at 10:00 a.m. also at the Church with Rt. Rev. Canon Walter Klimchuk officiating. Interment to follow in Holy Family Cemetery. Pallbearers will be his nephews Norman, Ron and Jim Markus, Bob McQuade, Jack and Randy Wall. In lieu of flowers, donations may be made to St. Anne's Ukrainian Catholic Church, CancerCare Manitoba, Alzheimer's Society of Manitoba, or a charity of your choice. Cropo Funeral Chapel 586-8044
Share Your Memory of
James
Upload Your Memory View All Memories
Be the first to upload a memory!