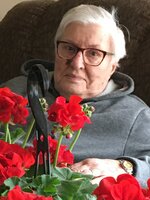 Olga passed away peacefully with her children by her side on Tuesday, June 21, 2022 at the Health Sciences Centre at the age of 95.

She is survived by her children Patricia, Gerry (Kim), and her grandchildren Karl (Taylor), Braden and Dayna. She is also survived by a few nieces and nephews. She was predeceased by her husband William (Bill), her sister Rose, her brother Peter and her parents Anastasia and Andrew.

She attended Isaac Newton School and then went to Normal School at The United College to become a teacher. She taught grades 1-12 in a one room schoolhouse in Lee River, Manitoba. Shortly after, she went to Success Business College. She met Bill while attending her sister’s wedding. They were married on September 30, 1950 right after the big flood.

For many years she worked in various offices such as Monarch Life Assurance, CAE Industries and Canada Grains. Later in life, she taught for many years at Red River Community College. She enjoyed traveling with her husband to several places including Florida, Las Vegas and her winter second home in Honolulu, Hawaii.

She was an extremely creative person who enjoyed crocheting, knitting and needlepoint. She leaves behind many beautiful samples of her handiwork which she shared with her family. She also enjoyed cooking and baking for many holiday dinners.

The family would like to express thanks to the following people, EMS, West St. Paul Fire Department, and the RCMP. We would especially like to recognize the exceptional care and compassion shown to the family by the medical and support staff at the Health Sciences Centre.

Funeral service will be held on Wednesday, June 29, 2022 at 10:00 a.m. at St. Joseph’s Ukrainian Catholic Church, 250 Jefferson Avenue, with interment to follow at All Saints Cemetery, 4535 Main Street.

In lieu of flowers, donations may be made to the Heart and Stroke Foundation, or a charity of your choice.