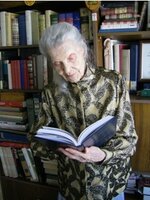 Born 1918 in Ciechanów near Warsaw, Poland. In Wilno she completed her chosen education as a teacher. With the outbreak of WWII, she was torn from her home on April 13,1940 and transported to Siberia with her mother, brother, and three sisters to a life of deprivation and hard labour. She undertook a dramatic, dangerous escape from a train to join the Polish troops, assuring her family that she would find them, achieving her goal to enlist on November 16,1941. She served with distinction in the 2nd Polish Corps, 8th British Army under General Władysław Anders, moving with the army through the Middle East, and then to Italy.

In Ancona she trained as a nurse, recognized for her humanity and devotion to duty. She was joyfully reunited with her family, all of whom miraculously survived. She married Dr. Seweryn Krzysztof Ehrlich in the army hospital chapel in 1945. The army was demobilized to England, where daughter Jolanta was born.

The family emigrated to Canada in 1949, settling in Saskatchewan where daughters Joanna and Ewelina were born. In 1965 the family moved to Winnipeg, Manitoba, where Irena joined Polish Combatants Association #13, Legion Branch #34 A. Mynarski,V.C.

In 1968, the family was greatly saddened by the passing of their husband and father after a long illness. Irena contributed to her community for many years, including serving as librarian in the Polish Combatants Branch, and teaching Polish school in the parishes of St. Andrew Bobola, St. John Cantius, and Holy Ghost Church. She served as a member of the Board and Secretary for the Polish Combatants Association, as well as the Polish newspaper Czas, and the Canadian Polish Manor residents’ association.

At age 92, she published Pamiętnik Ireny about her wartime experiences, reflecting her tremendous memory for detail and exhibiting the research of a lifelong scholar. Throughout the changes and challenges of her life, she never wavered in her dedication to Polish culture and history, and her belief in the freedom of the homeland she held foremost in her heart. She was decorated for service and valour at Monte Cassino, and also received the Italy Star, War Medal and Defence Medal. She was devoted to the family history she shared with sisters Jadwiga, Alina and Krystyna and younger brother Edmund.

Special thanks to Realcare for kindness and care, the Winnipeg Regional Health Authority, and Veterans Affairs Canada for unfailing support. We are inspired and blessed by her life and her memory.