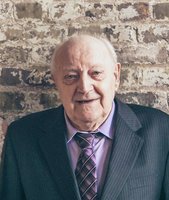 On February 15, 2021, at God’s appointed time, He called home our father, grandfather, and great-grandfather. He was predeceased by his wife Ellie of 63 years on November 20, 2015, and will be missed by his children and their spouses: Erna and John Moedt, Bill and Brenda van Beek, Ellen and Dave Shpak, Tina and Ed Harke. He was beloved Opa to 18 grandchildren and their spouses and 38 great-grandchildren, plus one due in May.

He was born in Enschede, the Netherlands on February 3, 1927, first-born to Albert and Hermina. He was predeceased by an infant brother and sister, and his sister Gea Kroezen in 1976.

When he finished school, he began working in a Textile Factory. Shortly thereafter, he contracted TB and spent several of the war years in a Sanatorium where he was living when Holland was liberated. Since his lungs could no longer handle that type of work, he had to learn a new trade. He had a variety of jobs, and later went to night school to become an electrician.

On July 22, 1952 he finally married his sweetheart, after being engaged for nearly 4 years. They were waiting to get married because there was no housing available. Eventually they decided to wait no longer and instead moved in with his parents where they lived until 1956. By that time they had two children, with a third on the way. The fourth was born 3 years later, completing their family.

In 1965, trusting God’s hand in their lives, Henk and Ellie immigrated to Canada with their four children. Henk decided a cruise ship would be a good way to travel to their new country, since it would then become a family vacation. The family of 6, along with Ellie’s sister Carla and her new husband Andy Piepers, left Holland on April 2nd and arrived in Quebec on April 11th. They continued their journey by train and arrived in Winnipeg on April 14th, where they were greeted by Ellie’s brother Henk Slaa and his family.

He began to work with his brother-in-law at SS Plumbing and Heating, until his retirement in 1991. Although that was his “paid work”, he loved to tinker and fix things. Because of his electrical training he was able to repair many items and earned the nicknames “Handy Henk” and “Opa fix”. In his retirement, Opa took up baking and wine-making. His cinnamon buns and wine were well-received at many a family function.

Although always a devoted husband, this was especially notable when his wife’s health began to fail. He supported her in every possible way and spent countless hours by Ellie’s side when she was a resident at Bethania Personal Care Home. He missed her terribly these past five years.

Henk’s Christian faith was of utmost importance throughout his life. He was an active member of the Canadian Reformed Church in Winnipeg, serving as elder for multiple terms. It was important that his children and grandchildren were raised in the faith.

Perhaps no one was more surprised than Henk himself that he lived to be 94 years old. First afflicted by TB in his teens, he then had a reoccurrence in 1977. In 1997 he was diagnosed with prostate cancer and although it was treated, he opted out of a surgical approach as he was already 70 years old and he did not come from a family of longevity. Each passing birthday was met with awe, especially his 90th.  In 2019, the doctors declared there was nothing further they could do for Henk’s cancer. It was difficult for Henk to wait on God’s timing to take him home.

The family would like to thank the Community Palliative Care program for helping us keep him in his home for as long as possible. We also thank the staff of 3E at Riverview Health Centre for the care he received in the past month.

The funeral will held on Saturday, February 20, at 1 pm, and will be livestreamed at https://gracecanrc.ca/funeral-HvB/

Rev. Joe Poppe, officiating. We thank him for the care and compassion he has shown Henk over the past years.