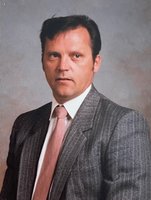 On January 30, 2021, after a courageous battle with cancer, Robert Edward Little (Bob) passed away peacefully at the age of 68 in Winnipeg Manitoba.   He is predeceased by his son Bobby Little, (father) Ross Little, (mother) Helene Little, nephew Joey Traynor and his brother-in-law, Jerry Schaefer.

Bob grew up in Larder Lake Ontario where he had many good friends and memories.  He graduated from KLCVI in Kirkland Lake.  In his young adulthood, Bob moved to Winnipeg where his family shortly followed.

Right from the start, Bob proved that he was a hard and dedicated worker.   He began his career as a young man in the Kerr Addison gold mine in Northern Ontario.   From there Bob worked at Canadian Tire as a mechanic, drove Winnipeg Transit, was a long haul truck driver and sold cars at various locations.    Bob’s last place of employment was at Winnipeg West at the end of Portage Avenue.  Bob loved dealing with people and getting them the best deal possible.

Many knew Bob for his ability to sing and entertain.  He loved Elvis, Conway Twitty and the old favorites.  Whenever there was a gathering, out came the guitar without question and requests were non-stop.  He won multiple singing contests and when Bob was around, he took over center stage.  He was a charmer and had charisma.  All those who knew Bob would agree.

Bob loved his family more than anything.  He loved when all his family was together.  It was a special treat when Bob and his brother Bill got together and sang songs for the family.

In the last year of Bobs life, he returned to his faith and reconnected with his God, Jehovah.  His faith of a promised resurrection here on earth gave Bob much comfort and joy.  He immensely enjoyed attending meetings via Zoom.  Bob spent time talking to others about seeing his loved ones again that he lost in death.  His hope was so clear in his mind of seeing them all again on a paradise earth.   He especially wanted to see his son Bobby and his parents.  The Scripture at John 5:28 encouraged Bob that “those in memorial tombs will hear his voice and come out to a resurrection of life.”  Revelation 21:4 also made the reassurance that “death will be no more, neither will mourning nor outcry nor pain be anymore.”

A special thank you to Annette and Janet for all your support to Bob.   Alysha MacMillan and Doctor Green at Cancer Care were outstanding.  Thank you from the family.