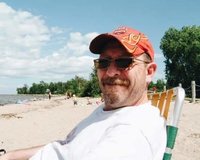 It is with deep sadness and devastation that we announce the sudden and unexpected passing of Darren Iwan. Darren was a gentle and soft spoken man who always found the positive in every person and situation, his super power was kindness and understanding. Born in 1961 Darren was the eldest son to his mom Sadie and big brother to Dale and Dwight. Always one for adventure and life experience, Darren spent a few years living with his Father in Halifax and Regina but eventually returned home to Winnipeg to stay. Darren found happiness in life’s simple pleasures. As a young man nothing was more exciting than heading down to Opus 69 on pay day and picking up a new LP then going home and spinning it on the turntable for his buddies and brothers. Darren’s love of music was infectious, as was his passion for road trips, fishing, pets or a simple game of cribbage. Darren was the fun and silly uncle to his beloved nephews Cooper, Adam, Max and niece Claire. Nothing put a bigger smile on his sister in law’s Gail (Dale) and Monique’s (Dwight) faces than “Uncle Didi” dropping in for a coffee with a joke or a silly story to share, Darren cherished his brother’s wives and was their friend not just a brother in law. In 2002 Darren’s life became whole when he met his beloved Michelle. Their love was genuine and strong, they were best friends. Darren became step father to Michelle’s beautiful children Nicole, Daniel and Sarah, it’s fair to say they were the light of his life and together they were the very definition of family, fueled by the most important thing in the world, love. Darren's family continued to grow with a son-in-law Daniel and hopefuls Avery and Cat, he looked forward to expanding the clan even more. Darren's infectious smile and wild sense of humour allowed him to put others at ease and build friendships with many. Darren was a very fortunate person finding a lifelong friendship with Chuck, Cathy, Don, Mark, James, Lisa, Derrick and Darlene. Darren was extra fond of his work buddy Deb, either driving her nuts or making her laugh. Darren was all about character, a person’s worth was defined by how well they treat others. Darren shared his late Mom’s super capacity to love and there is little doubt that the ones he loved will miss him forever. Darren’s departure was far too soon, there was so much yet for him to experience as a Husband, Father, Brother, Uncle and Friend. We love you so much Darren, thanks for always being you. A celebration of life will be held on September 19th at Assiniboine Park from 1:30pm-4:00pm. Set up will be at the fire pits #6, #7 and #8, located behind the zoo. It will be very casual as Darren was not a formal guy, you can pop by for a quick visit, or stay by the fire. The celebration will follow COVID rules, so extra precautions will be taken. “The woods are lovely, dark and deep, But I have promises to keep, And miles to go before I sleep, And miles to go before I sleep.” Robert Frost