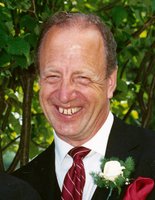 Peacefully, on the evening of June 20th, with his wife by his side, Joseph passed away, at the age of 90. Left to mourn are his wife Nettie, son Joseph (Karen), daughter Darlene (Dan) and son James (Susan), eight grandchildren and eleven great-grandchildren. Joseph was born in Lonesand, Manitoba. He spent his childhood with his parents, Paul and Nellie and sister Jeanie in a log house with no power or running water. Joseph attended Teachers College from 1948 - 1949 and taught school in Sandilands before moving to Winnipeg in 1951 to work at CN. Joseph married Nettie in 1953, moved to Winnipeg where they lived in an apartment for three years at Fort Garry Court before buying a house on Fermor Avenue followed by Ashton Avenue. Their home on Ashton hosted many family Christmas dinners and evenings with the Rozwood, Kraynyk and Schott families. Dad worked at CN Express for 35 years until his retirement in 1986. He enjoyed his work at CN with co-workers, Shotbolt, Bob Way and Ken Lawrence who would nail his shoes to the floor while he was away on holidays. Mom and dad enjoyed travelling over the years. They would travel across Canada on the train or packing up their car. They enjoyed trips to places like Puerto Vallarta, Mexico, Hawaii, Jamaica with multiple trips to Las Vegas. He had a life-long love of music, playing guitar and violin (he self-taught himself to play) and dancing. He especially enjoyed Ukrainian dances where you would find him twirling mom around the dance floor to music of the old-time dances like the 7 step, heel and toe, polka and country waltzes. After retirement, Joseph also enjoyed playing guitar in a band (Selkirk Avenue Seniors Center Band) and entertaining at the Folklorama Kyiv Pavilion, Selkirk Street Celebrations and many senior homes in Winnipeg, one of which was Holy Family Home. Joseph loved caring for his lawn, garden and the many potted plants and flowers he and mom would grow in their yard and nurture inside their home. Thank you to the staff on the 5A and St. Martha floors at Holy Family Home for their compassionate and loving care given to dad while he was a resident. Cremation has taken place at Cropo Funeral Home and a private service will be held. Vichnaya Pamyat - Eternal Memory