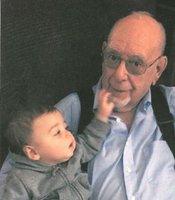 On Monday, November 4, 2019 with his family by his side Robert (Bob) Laurence Jackson peacefully passed away. He is survived by his wife June of sixty-four years, his children Kim, Robert (Mari), his grandchildren Drew, Colan (Brittany), Joel (Leah) and his great-grandchildren Chase, Jackson and Gracie, his brother Glen, and numerous family and friends.

Born in Winnipeg on March 18, 1936, Bob spent his early years in the small town of Altmont, MB. At the age of five Bob and his family moved back to Winnipeg, where he completed his education, worked various jobs and started his own family.

Bob ventured into his own business for several years (Accurate Washing Machine Company), and then proceeded to join the City of Winnipeg Water and Waste Department until his retirement on September 29, 1995 after 20 years of service.

Bob enjoyed twenty-four years of retirement with his many hobbies that included pin collecting, gardening and spending time with his family.

The family would like to thank the Healthcare Professionals at Seven Oaks Hospital, Health Science Centre and the WFPS.

There will be no service, however in lieu of flowers donations can be made to CancerCare Manitoba